Starring Danny Kaye, Glynis Johns, Angela Lansbury, and Basil Rathbone at his most villianous, with songs by Kaye’s wife Sylvia Fine and Sammy Cahn, and co-written, co-directed and co-produced by Melvin Frank and Norman Panama, this movie is still the delight it was 60 years ago.  One of Kaye’s best pictures, it featured both his great physical comedy skills and his mastery of both musical comedy and patter songs. Best moment: the wonderful word-play sketch: “The pellet with the poison’s in the vessel with the pestle, the chalice with the palace has the brew that’s true.” Dena Kaye, Danny’s daughter, said that for the rest of his life, people would walk up to him, and recite the whole bit, brew, pestle, and all. 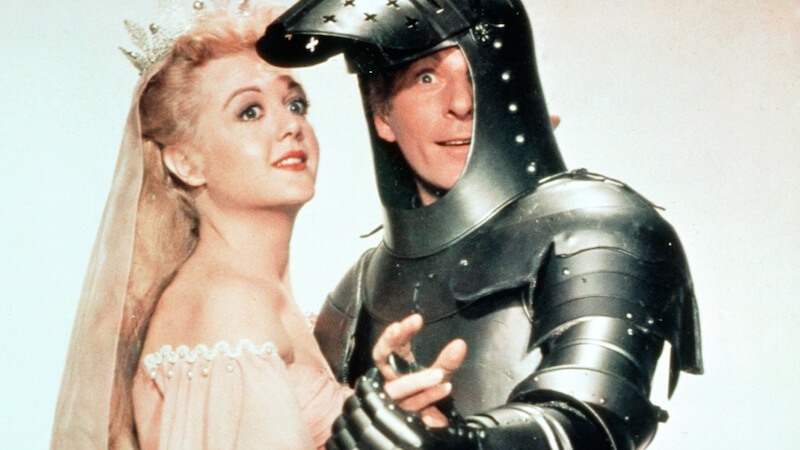 Kaye was often plagued with bouts of depression and self-doubt, and was known to be difficult on sets. As related by Angela Lansbury in her biography “Balancing Act”, by Martin Gottfried, says of Kaye “We never stopped laughing. There was none of that moodiness he could have elsewhere, that abruptness, ignoring people. If something interested him, sparked him, he came alive. The minute that was over, he was closed for business, which I think is true of many of the great comic performers. They are constantly out to lunch. Where they are, I don’t know.”

(Another interesting bit of trivia: it was Basil Rathbone’s final filmed sword fight.)

Do you love The Court Jester as much as I do?  Watch the famous “Pellet With The Poison” scene here.