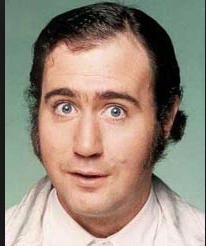 Andy Kaufman would have been 62 on Tuesday, January 17th. Never one to label himself a ‘comedian,’ Andy trail-blazed meta-comedy, almost daring his audience to get angry, or leave, as he read The Great Gatsby to them—in its entirety

Andy was one of a kind. While starring in Taxi, he also bussed tables at the nearby Jerry’s Diner. Not for a gag, mind you. He actually showed up and worked as a busboy, no joke. Or was it?

Andy Kaufman brought meta-comedy to the world, whether it was impersonating Tony Clifton, or challenging pro wrestlers to a match. Unfortunately for us, his lung cancer was no joke, although there are some who still believe that it was all a put-on, and Andy is out there somewhere, enjoying his greatest joke.

Happy Birthday wherever you are, Andy

I remember first seeing Andy on the initial broadcast of SNL back in 75, doing his inimitable “Mickey Mouse” routine.  Here it is, “… to save the day.”