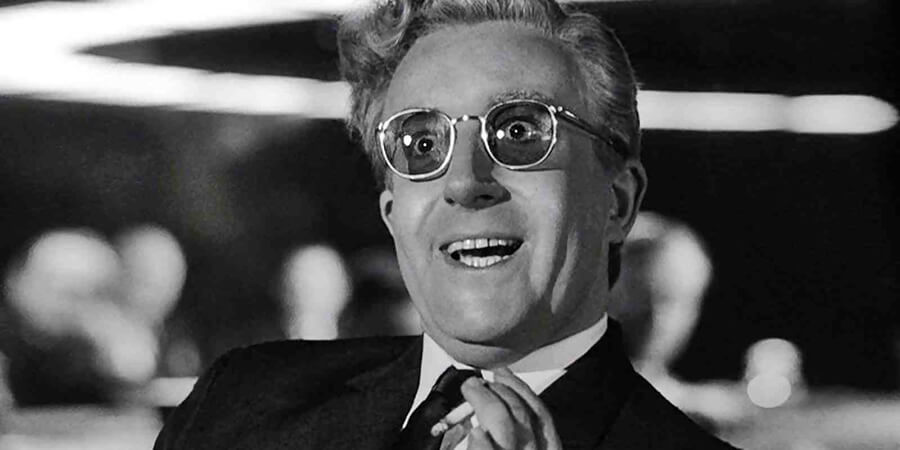 To celebrate my UK workshops, here’s an article I wrote for the British Comedy Guide. You can view the original article HERE.

I’m often asked, “What’s your favourite British comedy?” That’s an almost impossible question to answer. How can I select just one? Favourite contemporary comedy? Favourite Ealing comedy? Favourite Python release? There is no Favourite, because these are some damn funny apples and oranges.

What I can do is make a list of my favourite artists, writers and performers, and pick which one of their films I most enjoy. So here’s my list of my favourite British comedies. These might not make your list (remember funny is subjective), but they’re the ones which I think most epitomise what’s greatest in comedy writing, performance and filmmaking.

Dr Strangelove: A pitch-black satire that promised to help us “stop worrying and love the bomb.” In a film abounding with great performances (George C. Scott as a general eager to make love or war; Sterling Hayden as a man willing to go to any lengths to protect his precious bodily fluids), Peter Sellers tops them all with his portrayal of the fastidious RAF officer Lionel Mandrake, the slightly overwhelmed President of the United States Merkin Muffley and the eponymous Dr Strangelove, a maniacal ex-Nazi scientist who has figured out how to make the Armageddon as enjoyable as possible.

Favourite Moment: Slim Pickens, riding the bomb down to oblivion as he waves his cowboy hat and “Wa-Hoos” his way to oblivion.

Trivia: The film was originally financed with the understanding that Sellers would play four parts, including Major T.J. ‘King’ Kong, but Sellers sprained an ankle, and was unable to film in the cramped bomber set, so he was replaced by veteran western actor Pickens. 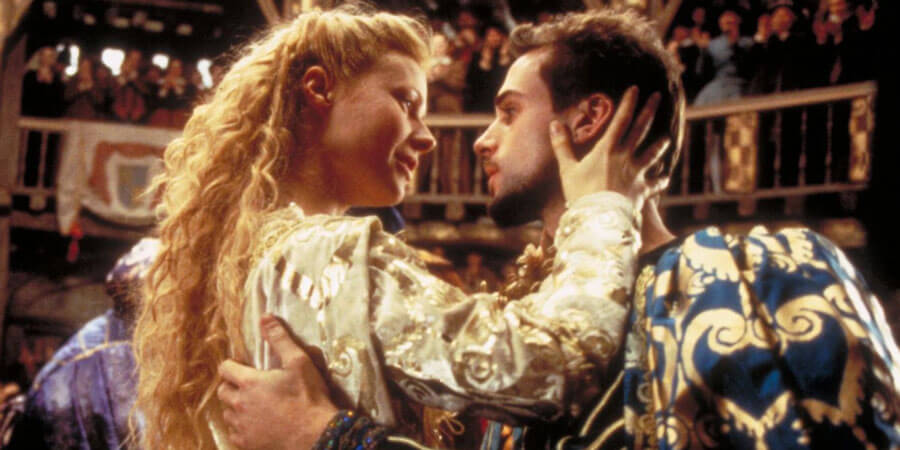 Shakespeare In Love: This period charmer, co-written by Marc Norman and Tom Stoppard (I guess this is also my favourite Stoppard movie), is a witty and passionate wet kiss to the theatre and features one of the truly delicious turns by Geoffrey Rush as an unscrupulous yet goodhearted producer, Philip Henslowe (he must be a distant ancestor of Zero Mostel’s Max Bialystock from The Producers).

Favourite Moment: Shakespeare, watching aghast as a stuttering actor prepares to open the play. In agony, he turns to Henslowe, “We are lost!” Henslowe replies, “No, it will turn out well.” “How will it?” Will demands. Henslowe simply replies, “I don’t know, it’s a mystery.” All those who work in the arts know the feeling that nothing will work out, and yet, often it does. How? It’s a mystery. 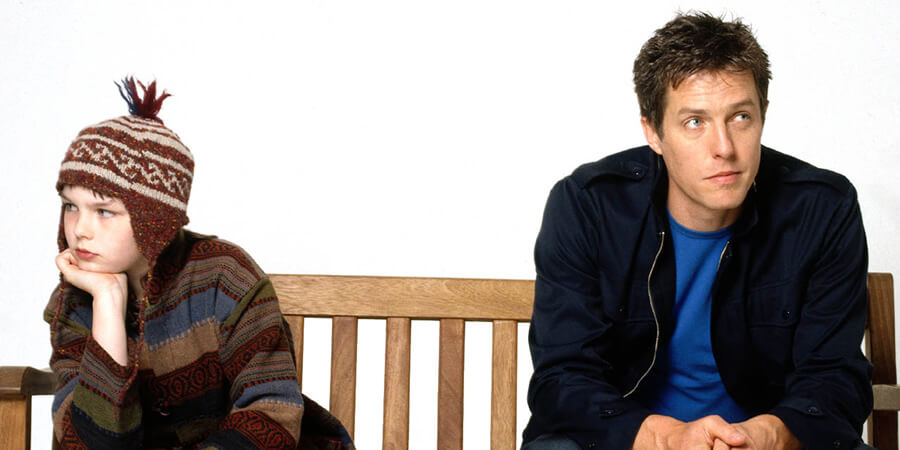 About A Boy: More than a bromance, About A Boy is a romcom without a ‘rom’, but one with more heart and soul than most other romantic comedies that are featuring age and gender appropriate partners. And maybe now we can put to rest the old saw that says that voice-over narration is a *&#*ing crutch. Hugh Grant‘s VO in this film conveys character, tone, theme and delivers the best of Nick Hornby‘s prose. 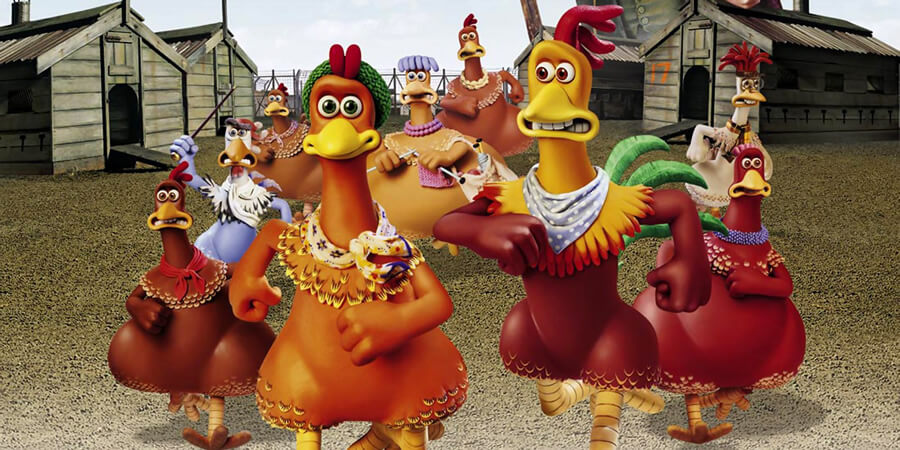 Chicken Run: Yes, Chicken Run. Maybe not as classic as a Wallace & Gromit short, but where else can you find the poultry version of The Great Escape, Stalag 17 and Prison Break all rolled up into one?

Favourite Supporting Chicken: The delightful Babs, a permanently befuddled chicken constantly knitting her way from calamity to another. 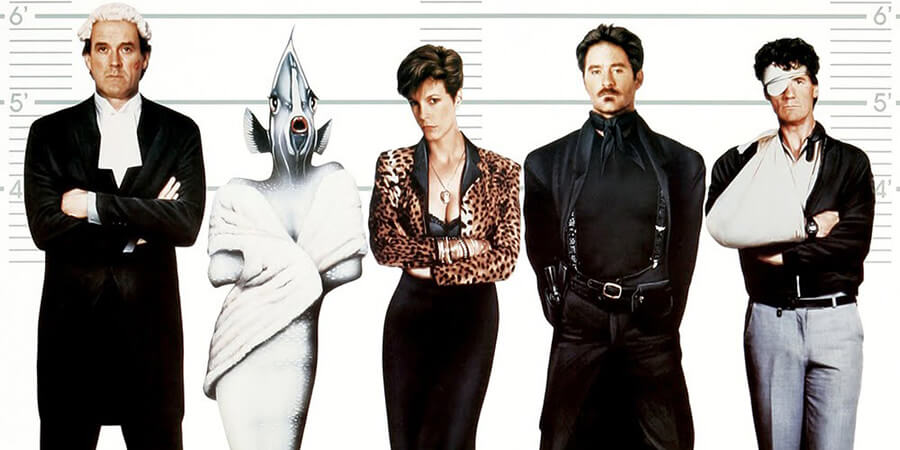 A Fish Called Wanda: Yes, there’s Michael Palin and an insanely inspired Kevin Kline, but the beating, passionate heart of this film is John Cleese in his best acting job since… ever.

It was directed by the then 80 year-old Charles Crichton, who had helmed such classics of British cinema as Dead Of Night and The Lavender Hill Mob. On the first day of shooting, Cleese gave Crichton a t-shirt that said ‘Age and Treachery Will Always Overcome Youth and Skill.’

Favourite Speech: Cleese, as Archie Leach (Cary Grant’s real name), is trying to explain to Wanda why being with her makes him feel free. “Wanda, do you have any idea what it’s like being English? Being so correct all the time, being so stifled by this dread of doing the wrong thing, of saying to someone ‘Are you married?’ and hearing ‘My wife left me this morning’, or saying, uh, ‘Do you have children?’ and being told they all burned to death on Wednesday. You see, Wanda, we’ll all terrified of embarrassment. That’s why we’re so… dead. Most of my friends are dead, you know, we have these piles of corpses to dinner. But you’re alive, God bless you, and I want to be, I’m so fed up with all this. I want to make love with you, Wanda. I’m a good lover – at least, used to be, back in the early 14th century. Can we go to bed?” 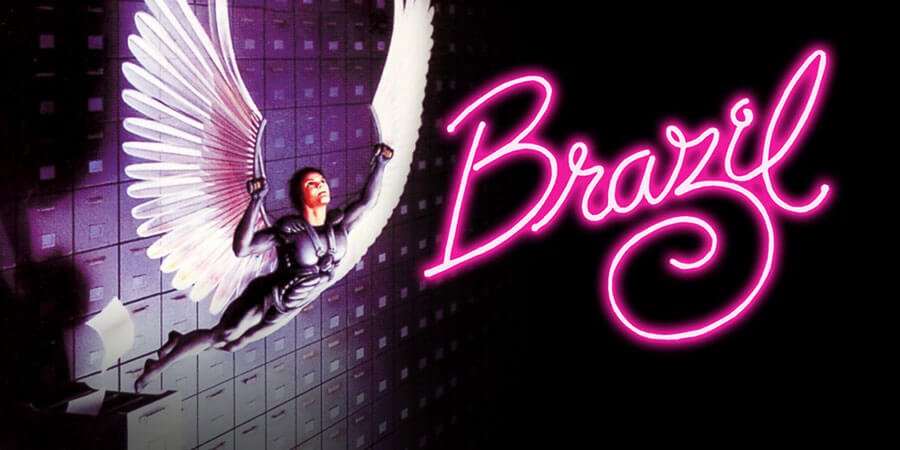 Brazil: Is Brazil even a comedy? Is it even British? It’s my list, and I say “Yes!” and I say it’s Terry Gilliam‘s mess of a masterpiece. Studio exec Sid Sheinberg obviously agreed that it was a mess, and since the film was a few minutes over the contracted length, had it recut to eliminate the dark ending the complexity, under the rubric, “Love Conquers All.” Sheinberg was determined to release the film with the “Love Conquers All” cut, but Gilliam was able to hold several illegal private screenings in LA, including screening the film for the LA Film Critics Association “who promptly voted it Best Picture, Best Screenplay, and Best Director, even though it hadn’t been released.” End result? Masterpiece won out over mess, and Gilliam’s cut was eventually released.

Favourite ‘Our Economy is in the Shitter’ Comedy 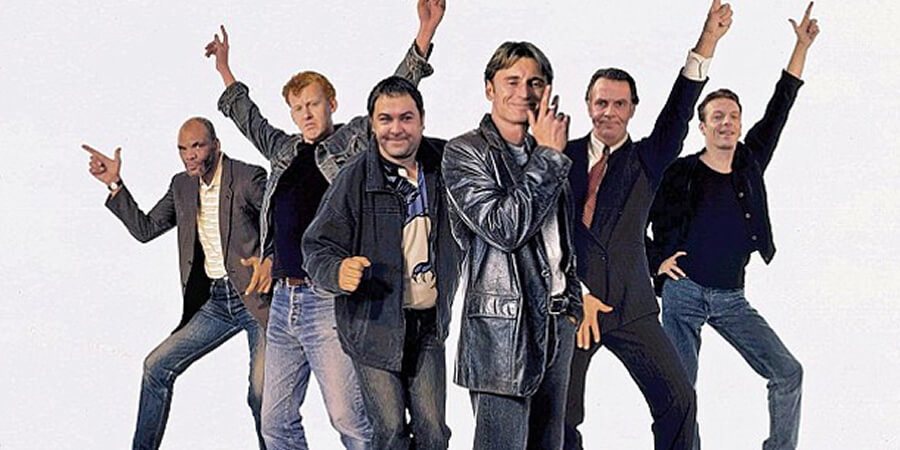 The Full Monty: OK, six guys take their clothes off, but more than that, the movie explores the social disruption of the Thatcher years and finds hope in a bunch of working class blokes exposing all to regain purpose and camaraderie in their lives.

Favourite Moment: Dancing in the dole queue to Hot Stuff. 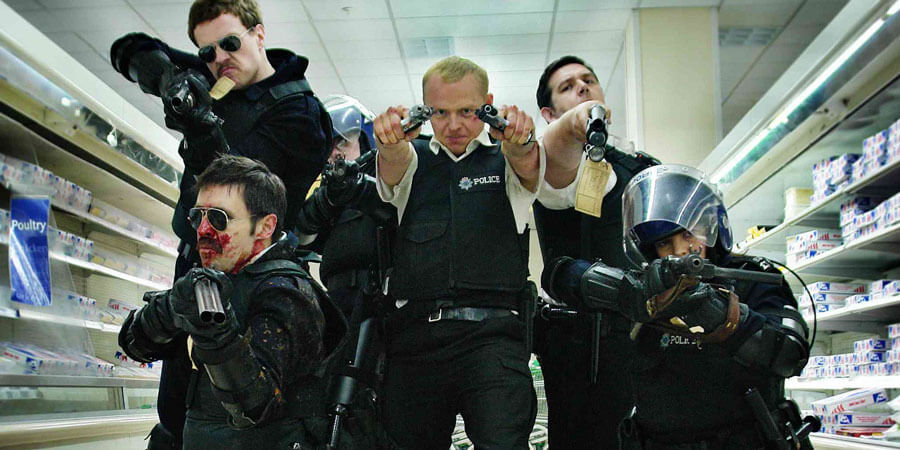 Hot Fuzz: Which also makes it my favourite Edgar Wright (director) and Nick Frost (co-star) movie as well! Better than parody, Hot Fuzz is a loving, if loopy, tribute not only to those buddy-cop action pics starring Gibson, Willis or Schwarzenegger, but also to the bucolic English villages that harbor the quaint, eccentric British characters. 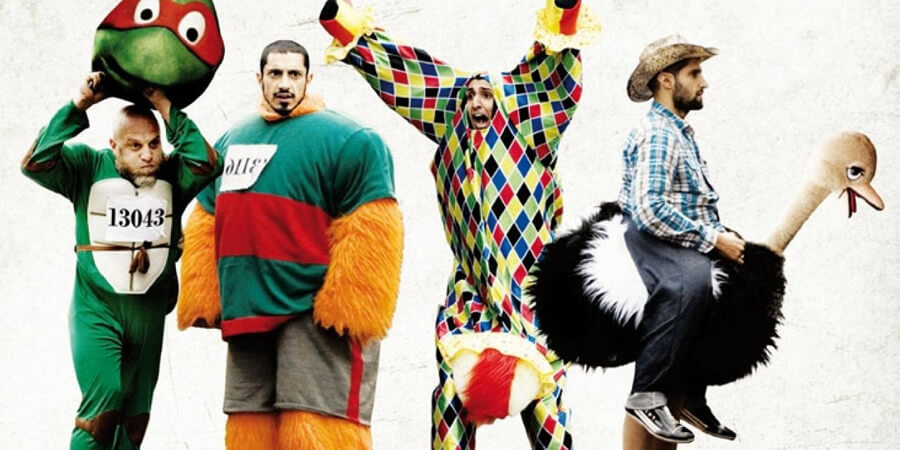 Four Lions: You can’t make a comedy about a bunch of terrorists out to blow up London, can you? Well maybe you can’t, but Chris Morris‘ apocalyptic satire finds the humanity in the inhuman actions of a bunch of inept would-be suicide bombers. Despite yourself, you find yourself empathising and rooting for our heroes to somehow get out of their own way and to, well, not blow us, or themselves, up. 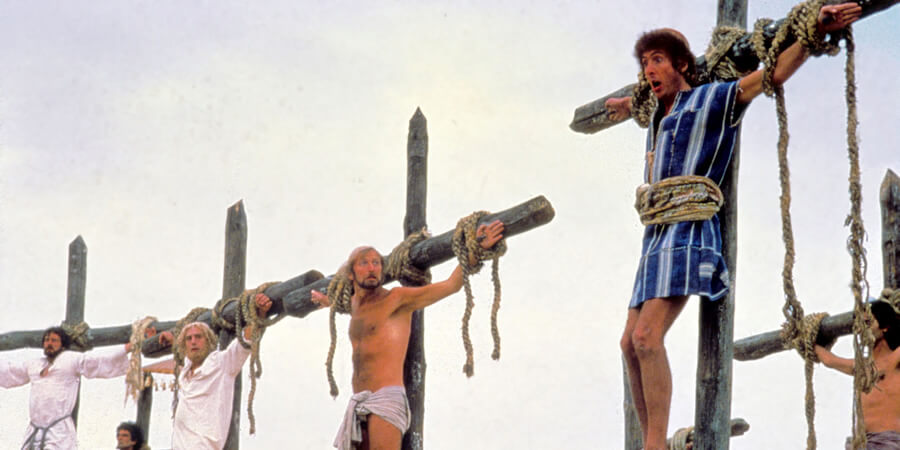 Monty Python’s Life Of Brian: More than a series of sketches, Brian is a brilliant, complete film, with a coda that captures in a song the entire meaning of comedy and meaning of life.

Favourite Moment: The whole film, from the Wise Men barging into the wrong stable through to Eric Idle singing: “For life is quite absurd; And death’s the final word; You must always face the curtain with a bow. Forget about your sin – give the audience a grin; Enjoy it – it’s your last chance anyhow.”

So that’s my list. You probably have a completely different list of 10. And you know what? You’re right too. As a Yank, I’m probably overlooking some gem that might not have translated so well on my side of the pond, it just means that I have some gems I can look forward to discovering!

Let me know in the comments below which films would be on your list!