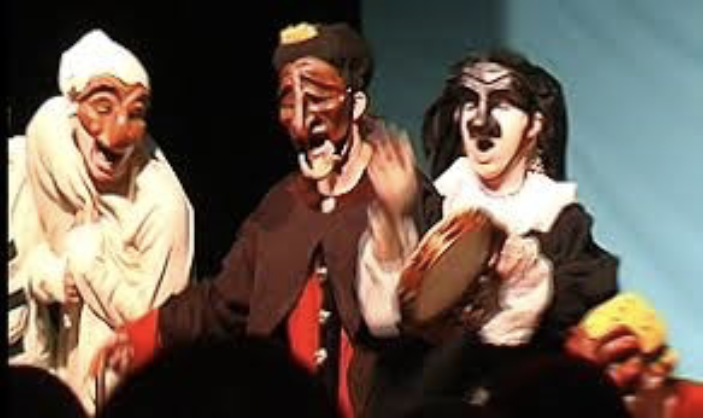 I’m excited to announce the upcoming publication of my new book, The Comic Hero’s Journey: Serious Story Structure for Fabulously Funny Films. The book will be published sometime this fall, but I’d love for you to get a special sneak preview. So here is an excerpt from Chapter 1 of THE COMIC HERO’S JOURNEY:

“Eagles may soar, but weasels don’t get sucked into jet engines.”
~ Steven Wright

CHAPTER ONE: THE SCHLEMIEL WITH A THOUSAND FACES

In the beginning was the film, and the film was Star Wars. OK, that’s not how that book goes, but it’s not a bad way to start off this one.

This book owes a big debt of gratitude to Joseph Campbell and his Hero with a Thousand Faces, and an even bigger debt to my friend Chris Vogler, whose study of Campbell led to The Writer’s Journey, his insightful melding of Campbell’s mono-myth with screenplay structure narrative and story-telling.

Just to remind you or refresh your memories or if you’ve never heard of it before, The Writers’ Journey consisted of:

If you think about Star Wars, it closely tracks the steps in the Hero’s Journey. Near the beginning of the film, we meet our Hero, farm boy Luke, living in the boring old desert world of Tatooine (Ordinary World) when he stumbles across the holographic message from Princess Leia (Call to Adventure) Following the message he meets with Obi Wan Kenobi (Meeting with the Mentor) but refuses to go to Alderaan with him (Refusal of the Call) because he “has so much work to do” and because “it’s all so far away.”

He returns home, however, only to find that his Aunt and Uncle were murdered by the Empires stormtroopers, and returns to Obi-wan declaring that he now wants to go to Alderaan, “I want to learn the ways of The Force and become a Jedi like my father!”

Traveling to the seedy port town of Mos Eisly (Crossing the First Threshold), Obi-Wan enlists the help of rogue smugglers Han Solo and Chewbacca of The Millennium Falcon, where Luke practices wielding The Force (Tests, Allies & Enemies.) Jumping through hyperspace to what they think is Alderaan, they discover it’s been destroyed only to be pulled aboard the Death Star (Approach to the Inmost Cave) where in rescuing Princess Leia, they must fight off the Stormtroopers and Darth Vader, only to face death in the trash compactor and suffer by witnessing the death of the mentor Obi-Wan (Ordeal.)

At the rebel base, Luke realizes his wish: he gets to be a fighter pilot for the Rebellion. Plus, he gets a kiss on the cheek from Princess Leia! (Reward—Seizing the Sword.) Luke and the fleet return to attack the Death Star (The Road Back), where he faces almost certain death. As Darth Vader zeros in on his fighter, Luke hears and heeds the voice of Obi-Wan and becomes one with The Force as Han Solo returns just in the nick of time! (Resurrection), destroying the Death Star! With that stunning victory, Luke, Han and Chewy mount the platform where Princess Leia honors them for saving the Rebellion and restoring hope to the galaxy. Luke is now a man in full (Return with the Elixir.)

But you knew all that already.

So, what happens in a comedy? A comic hero or heroine also go on a journey. In some aspects, it’s very similar to what Chris Vogler and Joseph Campbell (Cogler? Vampbell?) write about in their books. But in many aspects, it’s quite, quite different.
When Luke’s family is killed, he bravely and solemnly vows to “learn the ways of The Force and become a Jedi like my father.” A comic hero would have unbravely tried to run away so as to not get killed. Throughout Star Wars, Luke is adventurous, brave, stalwart. When he’s chasing after R2D2 and there’s the threat that the Sandpeople might be about, he grabs a rife, and with no small amount of pluck tells C3PO, “Let’s take a look!”

As the Cowardly Lion says to Tin Man and Scarecrow outside the Wicked Witch’s castle:

COWARDLY LION All right, I’ll go in there for Dorothy. Wicked Witch or no Wicked Witch, guards or no guards, I’ll tear them apart. I may not come out alive, but I’m going in there. There’s only one thing I want you fellows to do.

COWARDLY LION Talk me out of it!

The hero decides to go on the adventure. The comic hero often has no choice.

The hero has a wise old man; The comic hero often meets an idiot who inadvertently says something that can teach him a thing or two.

There have been a lot of books written about story structure in feature films. I should know; many of them are written by friends of mine. But there have been few that deal directly and explicitly with story structure in comedies. Pablo Picasso reportedly once said that “Good artists create; great artists steal.” So that’s what I did—I decided to steal Chris’ idea (only please replace the horrid word steal with the more stately term, homage), and write my own book about story structure, but specifically as it shows up in comedic features.

In the Comic Hero’s Journey, your protagonist goes through a transformative experience as well. The steps of that are:

. . . The shot hits the fan, the apple cart is overturned, all hell breaks loose–boy wakes up to find he’s a 30-year old man, guy finds that every day is still Groundhog Day—and when it does, there’s a desperate attempt to return to the Normal World in . . .

. . . This is where your protagonist desperately tries to put his normal world back together. In Big this is Tom Hanks taking a bike and riding out to where the fairground was, and then coming back home and telling his mom, “Mom, I wished on a fortune telling machine and I got big!” But no one believes him, which leads to . . .

. . . In the comic hero’s journey, your character starts to make connections that they have never made before. Love interests, allies, unexpected friends. And because of those connections they go off in . . .

. . . They go off in paths they hadn’t thought about going off before, leading to the Discovered Goals. But just when all seems well there’s the inevitable . . .

. . . when they break up, or it looks like all is lost. In Dodgeball, this was when Vince Vaughan seemingly throws the game and sells out his team, but just then there’s a revitalization and recommitment to achieving the discovered goal and there’s the . . .

7. Race to the Finish

. . . In romantic comedy, that’s a race to the altar. That’s Dustin Hoffman racing to the church, Billy Crystal or Woody Allen running through Manhattan to try to get to the love of their life before it’s too late. There’s always some hectic action in which the hero, the protagonist, and usually the protagonist’s friends and allies, desperately try to achieve the final goal. In 40 Year Old Virgin, Steve Carell realizes that no he doesn’t want to go to bed with the bookstore girl (who’s in the bathtub pleasuring herself—you had to be there) and realizes that he really loves Catherine Keener, so he has to race to go get her. And of course, since he doesn’t drive a car, it’s a race to the finish on a bicycle in which he is hit by a bus. After the race to the finish there’s the denouement or tag or even just a beat, which gives us the sense that there’s a better world ahead.

Except, first, let me give you a caveat. This is not a formula. It’s not a template. All these steps happen in most well-structured comedies, but not necessarily in this order. Most people think of the low point in a comedy as occurring about three-quarters of the way through the film. And it does, in most films. But not in all. In Groundhog Day, Bill Murray tries to kill himself about halfway through the movie. In Tropic Thunder, the platoon breaks up and Ben Stiller tries to go it alone again about halfway through. Other movies may skip or skimp on one step or another. In most movies, all of these elements are somewhere in the movie, but do they HAVE to be in this order? No.

There are a lot of great, idiosyncratic, atypical movies. And while most comedies begin in The Normal World and end with Race to the Finish, yours doesn’t need to. Your comic hero is on his or her own journey. The routes may be similar in many ways, but as they often say in the showroom, your mileage may vary.

So as Philip Roth once wrote, “So. Now vee may perhaps to begin. Yes?”

Hope you enjoyed Chapter One! Pre-order the book and I’ll email you an excerpt from Chapter 2 as an additional sneak preview, PLUS you’ll get an autographed copy of the book as soon as it comes out!